One of the original natural fabrics. Linen comes from flax – from the Linum genus native to the middle East. To turn flax into linen, the stalks must be threshed, retted, broken, scotched, hackled, carded and spun.

Linen is best on loose-fitting, simple, boxy garments.  As a natural fiber, it should be preshrunk before cutting.  Wash gentle, hang dry to limit wrinkling.  Zigzag (SL 3.0; SW 3.0) the cut edges before washing.

It can fray.  So either cut it with pinking shears or zigzag the edges (SL 3.0; SW 3.0) right after cutting.

Wrinkles are part of the linen’s beauty.  To limit them, spray garments with sizing or Grandma’s Wrinkle Remover (available at PFI supply).  Hang garments where they won’t get smashed.  Hanging them in a steamy bathroom before and after wearing also releases wrinkles. 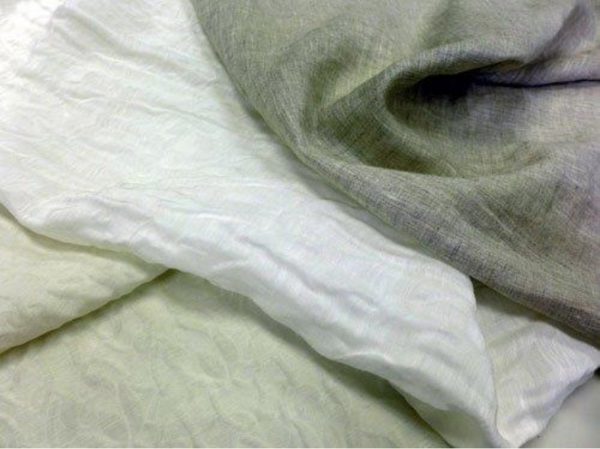 Linen may be the oldest natural fiber.  Fabrics dating to about 8000 BC have been found in Swiss lake dwellings. Dyed flax fibers found in a prehistoric cave in Georgia suggest the use of woven linen fabrics from wild flax may date back even earlier to 36,000 BC.

Linen was sometimes used as a form of currency in ancient Egypt. Egyptian mummies were wrapped in linen as a symbol of light and purity and as a display of wealth. Some of these fabrics, woven from hand-spun yarns, were very fine for their day, but are coarse compared to modern linen.

Linen comes in a variety of weights and can be used for such items as handkerchiefs to heavy suitings.

It is cool and comfortable to wear in warm climates. It absorbs moisture easily but dries quickly. It is lint free, averse to static electricity, resists clothes moths and harsh chemicals in laundry detergent. It can be damaged by silverfish and mildew.

Linen is notorious for wrinkling, even when treated with a wrinkle-resistant finish. As a natural fiber, linen shrinks so it should be washed before cutting. It also frays badly so edges should be stitched, preferably with a zigzag stitch (SL 3.0; SW 3.0) before washing.

When laundered, linen loses some of its crispness and surface luster. Some linen is so loosely woven that it loses it shape when washed so test a 3″x3″ square before laundering yardage. That’s why some linen garments are dry clean only.

Iron from the wrong side. It can get shiny when pressed on the right side without a press cloth. A good trick is to hang the garment in a steamy bathroom. Ultimately, embrace the wrinkles as part of linen’s natural look and use it only for looser garments.

Can you dye linen? Yes. But it does not dye as easily as cotton. Darker colors “crock” easily (the color rubs off) and fades at fold lines and edges. So hang garments flat and don’t crowd.

Linen garments keep their shape well but have poor elasticity. They shed surface dirt, resist stains and sun damage but they yellow with age. They are strong when dry and stronger when wet. That’s why 3rd Dynasty Egyptians under the reign of Pharaoh Snefru could use them as clothes one minute and a fishing net in the next.

One pass through the machine and you have an elast

PFI grad Corazon sez: "Just wanted to pop in and u

Wow! It really is true. PFI patterns are getting