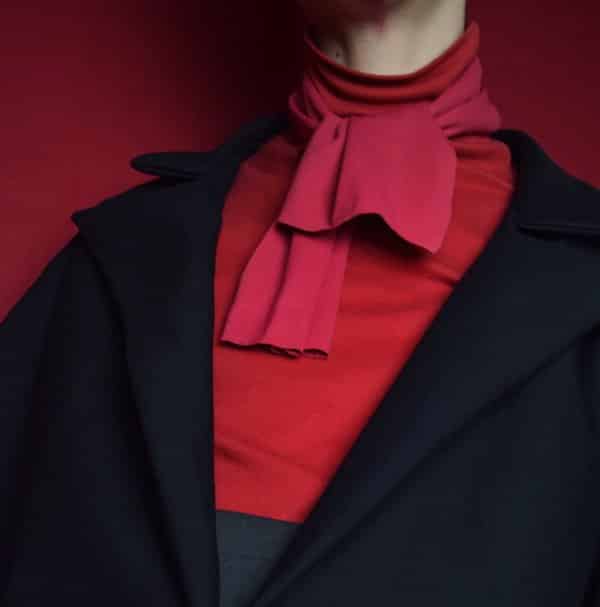 Each won a scholarship contest and $2,000 worth of fashion design classes at Portland Fashion Institute, an apparel design and sewing school in northeast Portland.

As a result, each will build their skills and create a portfolio that could land entry into a prestige fashion design university.

“Normally, we choose only one winner each year,” said PFI director Sharon Blair.  “But both of these applicants were so strong, we had to choose both.”

Ryan chose a sportswear theme he calls “Spacesuit for the Streets”.  A varsity lacrosse player, he took advantage of a knee injury to design what he saw was missing from menswear:  An updated angle on the traditional t-shirt, hoodie, sweatpants that every teen wears. Bright orange and white with lots of zippered circular pockets, his outfit is not only functional, it is stylish.

“I aim to create high fashion for everyday use,” Ryan says.

Vlasich won based on his designs for an oversized angular suit he calls a “reaction to the toxicity of modern society.

Both taught themselves to pattern, fit and sew. Both are 17.

This is the eighth year for the annual contest. It is open to full-time students in Portland and Vancouver area high schools who have a GPA of 2.5 or more. Each contestant creates an original apparel design idea with sketches, interviews of influential people and an essay on fashion design.

More than 6,000 persons have studied at PFI since it opened in 2010.  While most students come to PFI for a class or two, those interested in a career have gone on to start their own clothing lines, to work for one of the area’s many apparel companies or to gain entry into one of the top schools in New York, London or Paris.

Admit it now. @ericlesovs knows how to drape Nex

What is life without cute bound buttonholes? Want

This could be you. Give yourself the gift of a fu

When tailoring a jacket, be sure to twill the edge

We are thankful for the skills we have earned and

We are so thankful for our wonderful students and

Waiting for the turkey to bake? Let’s padstitch